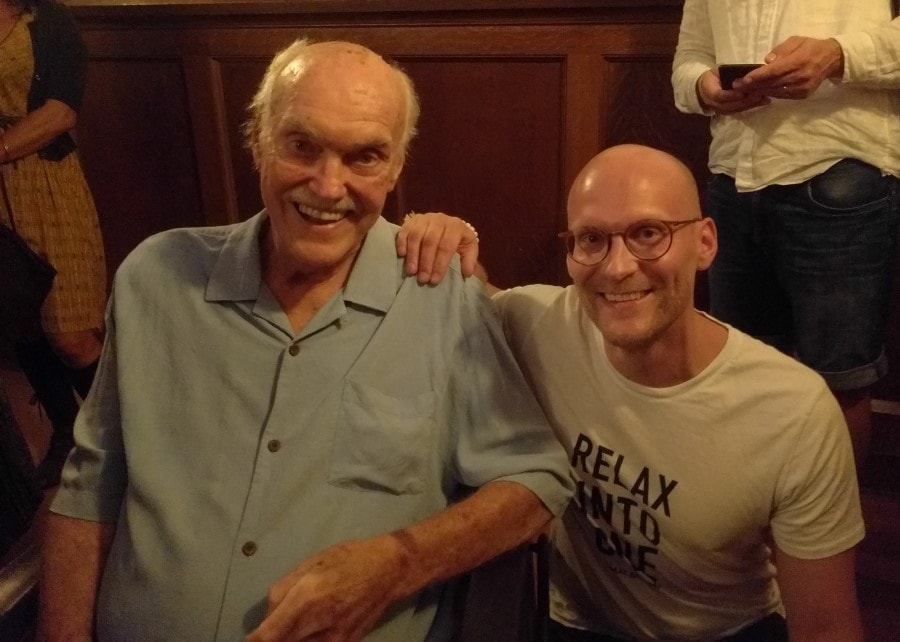 At the end of November 2017 I went to Maui, Hawaii, to attend the Ram Dass Thanksgiving satsang which he held together with Krishna Das. The following day, Krishna Das also held a kirtan concert. During both evenings, the beautiful church of Makawao Union Church was filled with people who came from all over the world hoping to get to know the path that Ram Dass and Krishna Das have been teaching for years – the path of the heart. The meeting with these two people came to affect me deeply and they touched my soul, and for days after my intellect struggled to understand what had happened in my heart.

The first evening started with Krishna Das, along with his band, playing music for about an hour before Ram Dass entered the stage together with Krishna Das and Raghu Markus. During the evening they talked about subjects such as joy, love, ego, soul, God and, of course, their guru Neem Karoli Baba. But for me, it was not the words that were important or that left an impression on me. I had already read the books, listened to the talks online. To me, all of this was overshadowed by Ram Dass’s presence. It was obvious what an enormous effect he had on the people in the church. It’s hard to put into words how his presence affects one’s self and others, but noone can avoid noticing what an incredible human being Ram Dass is. He is like a sun that illuminates everything in his presence. And for my part, what I loved most of all was his silence. In it was more than words could express. It was as if his invisible hand was stretched out to me and touched my soul. A palpable silence appeared within me in which I stayed the whole evening. Ram Dass was impossible not to love, because he was love. He was joy and peace. Never before have I met a person like him. I think nobody in the audience wanted the satsang ever to end. The church was so full of love and joy and we all sat there and drank as much as we could while we had the chance.

After the satsang I was given the opportunity to go up to Ram Dass to take a photo for this article, which I had decided in advance to write. As he took my hand and looked into my eyes, my heart burst open and I could barely speak. I got my pictures for the article and just barely managed to say a few words before I somewhat dazed walked away. It would take several days before I could start to understand what had happened this evening, if it’s even possible to understand.

The next evening it was time for Krishna Das’s concert. For several years I have listened to his music daily and it has been a big part of my spiritual practice and for many years I have longed for an opportunity to attend one of his live concerts. He has an incredibly down to earth, humble and lovely way to be, and it’s very easy to feel good around him, but it’s when he starts to sing the true magic takes place. During the evening I sang along song after song and gradually I went deeper and deeper into myself and the evening would turn out to be like a rollercoaster of experiences.

The first experience came when he sang Good is real / Hare Ram which is a song where he mixes Indian kirtan with American gospel. I felt that I could fully relate to his words and suddenly I experienced the Beingness that is the source of everything. I experienced how all I experience was within me, within my own Being. I felt boundless, happy and full of love. I have experienced this before during meditations and now it came back again.

Later, between two songs, Krishna Das pulled a joke and a woman behind me laughed loudly and I found myself judging her for trying to get Krishna Das’s attention. I felt very ashamed of my silent judgment and went into a bad mood. Then I realised that I was actually judging myself because I had not laughed at the joke as she had. My judging of her was in reality a covert judging of myself. I had looked down on myself because of how I am as a person, who was unable to laugh at the joke, and this judging of myself I projected on to her to avoid looking at myself. But after this painful insight came the next one that lifted me up again. I saw that I do not have to react and act like other people do, that I can choose not to laugh without judging myself for it. That I do not have to do what others do and I can be confident in being myself. In other words, I found love for myself, and with that insight my judgment of the woman went away and was instead replaced with love. The totality of this entire episode took place in just a few minutes and afterwards I can see what an amazing personal insight and transformation I experienced there and then. Never had I thought that so much would surface from within me during this concert.

The next experience during the concert came to the song Saraswati. I saw what simple technique it is Krishna Das teaches us. How it is enough to just remember God. To repeat his name over and over again. The rest will take care of itself. You do not have to try to get into different states of mind, try to be happy or look for anything. You only need to repeat God’s name over and over again, and things will happen by themselves over time. You do not have to worry about when and how. It happens when it happens. Just keep doing it. I really connected with the beauty of this teaching.

After this experience, I again lost contact with the joy that came with my insights and I could no longer feel the high I had just had. Then I realized that it’s not the high that is It. The highs comes and goes, but It is always there. I started to see that between my different experiences of ups and downs there was always something in the background, and suddenly it hit me, I remembered God in my heart. I felt how God was there, in the middle of my chest, radiating out in all directions. I suddenly remembered several occasions during the evening when I had been fully aware, but how I forgot about this when I returned to unconsciousness again, but how I could now see that it was just my definitions of It which caused me to miss It when It did not fit my definition. I now felt how everything was God, and that I was all. It was a memory brought to life. A recognition rather than a discovery. I remembered God in my heart. There he was. As me. Where he had been all the time.

The days after meeting Ram Dass and Krishna Das were confusing in many ways. My intellect had difficulty understanding, because in the exterior that not much had happened, but something had happened in my heart. I had recognized God within my own heart. I felt that a change had occurred within me. It was an humbling experience and I felt a huge gratitude.

On the plane back home to Sweden I discovered another strange thing. For a long time I have studied and followed several gurus and saints. In addition to Neem Karoli Baba, I have been strongly  influenced by Ramana Maharshi, Martinus, Papaji to name a few. But when I now thought about them, I could no longer feel them like different individuals. This was very confusing for my intellect, because I had different faces of them in my mind, but in the plane of feelings they were all one. And they were one with Ram Dass and with Krishna Das when I thought about them too. It’s hard to put this feeling into words of not being able to see the difference between different individuals. The difference is still there in the outer experience, but on the inside, in the heart, they are all one. In my experience when I think about them, they are all The One. And also, I can not separate them from myself. Underneath the surface I can now feel something I could not feel before. An underlying relationship that is impossible to put into words. It’s still a bit unclear, but it’s there every time I look.

These two days with Ram Dass and Krishna Das really exceeded all the expectations I had prior to the event. I still feel dazed and find myself searching for words. But on the other hand, I also feel that no words are needed. The answer IS in my heart all the time. Of course, I still find myself drawn into the dramas of my life and tend to forget, but as soon as I turn my attention back to my heart, I remember. I remember God in my heart. In mine and in yours.

Thank you Ram Dass and Krishna Das. Thank you Maharajji, with all my heart, thank you! <3