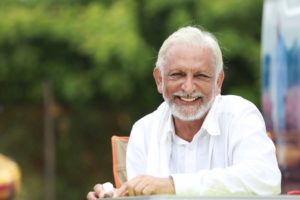 The first time I ever heard of Sri M was when Magnus shared a video he had seen a few days earlier. When I watched the video, I was initially quite skeptical, but the more I listened and focused on the story he shared, I became increasingly interested. A few moments later, I began to feel a very strong pull towards him.

Sri M has lived a fascinated life where he met and lived with great spiritual masters. He was born on November 6, 1949 but his journey began well before this. In a past life, Sri M was a direct disciple of the great guru Babaji who lived in the Himalayan mountains. One day while sitting and meditating in a cave, a man came to Sri M. The man was exhausted because he had walked very long to meet Sri M, or Madhu who was his name in the past life. The man who visited him was Muslim and wanted to learn the truth from M. But M denied the Muslim man because he did not want any disciples. The Muslim man felt heartbroken and no longer saw any meaning with his life. If he could not find the truth that his heart cried out for he felt that he could as well die in order to unite with God. He threw himself into a nearby lake and drowned. His master Babaji was very disappointed in M and had him reborn as a Muslim in his next life to make a similar journey as the Muslim in order to understand the suffering he had created for the man.

Sri M lived and learned from his guru for 3.5 years until he was told to return to society again. Since then, he has shared the knowledge he has learned and guided people on the path. He has formed the organization The Satsang Foundation and released a number of books. Including the bestseller Apprentice to a Himalayan Master: A Yogi’s Autobiographyr. This book is wonderful if you want to know more about Sri’s amazing story and he has also released a sequel where he continues to share his exciting and amazing story.

During March 2017 we visited Villa Unspunnen in Switzerland and attended a retreat with Sri M. We talk about our experience during this retreat in Maldorma TV- Episode 20.